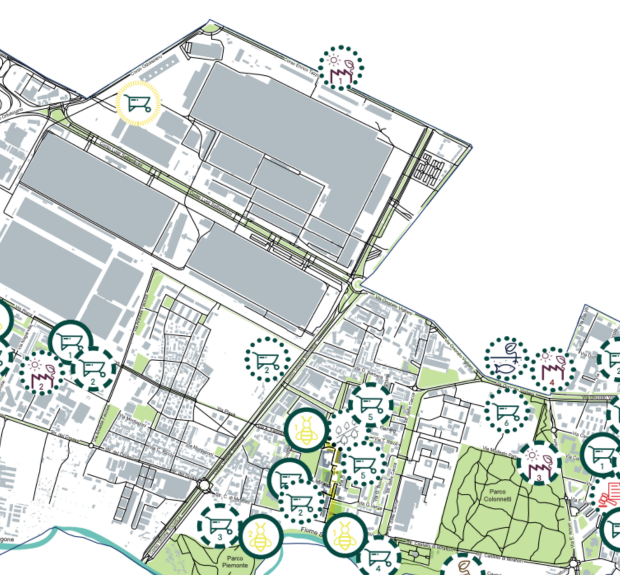 proGIreg (productive Green Infrastructure for post-industrial urban regeneration) is a Horizon project funded by the European Union, which envisages in three pioneer cities (Dortmund (DE); Turin (IT); Zagreb (HR)) to create Living Labs in urban areas to address the challenge of post-industrial regeneration. These areas suffer from social and economic disadvantages, inequality and related crime and security problems. They lack quality green spaces, have a negative impact on human health and well-being and are more vulnerable to the effects of climate change. Going beyond the current state of the art with green infrastructure as a one-off state intervention, proGIreg Living Labs will develop natural-based solutions (NBSs) that are citizen-owned and co-developed by the state, the market and civil society actors. Innovation will take place at the technical level through the implementation of NBSs, at the social level through co-design, co-creation and co-implementation of NBSs with local communities and at the economic level through the combination of NBSs with market-ready business models. Four follower cities in Eastern and Southern Europe (Cascais (PT); Cluj-Napoca (RO); Piraeus (GR);  Zenica (BA) will co-manage the research process to ensure replicability and adaptability to their local context, resulting in urban plans for NBS deployment. The NBSs to be tested include: regenerating biotic compounds from industrial soils, creating community-based urban agriculture and aquaponics, and making renaturated river corridors accessible to local residents.

The scientific evaluation and monitoring results of the Living Labs will be made available on the EU NBS platforms OPPLA and THINKNATURE and will contribute to the European NBS framework. Global impact will be achieved by a training programme for the cooperative planning, implementation and management of NBS. It will be provided by partners from the cities, SMEs and universities involved. Training events will be organised in cooperation with the partner, ICLEI. Massive Open Online Courses (MOOCs) will be distributed via EdX, the world's most renowned MOOCs platform.